What are the factors, processes, and responsibilities? The modern concept of innovation is younger than usually expected. It is a product of post-industrial society, when new knowledge successfully presented at the market became the determining factor of value creation. It is quite surprising that most people still don’t have a precise understanding of the difference between invention and innovation. This means that they fail to recognize the essential difference between a discovery, and development of a new product or service, which effectively responds to a real need being confirmed by the market. Importantly, while invention is primarily supply-driven, innovation is at least partly demand-driven.

However, as Nick Skillicorn clearly demonstrated, the concept of innovation is not so simple to define. When he asked 29 internationally recognized experts for a clear and short definition, not even two of them were completely identical. This confirms that we are dealing with a rather complex phenomenon, with two elements clearly dominating: novelty (derived from Latin word novus for "new"), and value creation.

Over the last 40-50 years the nature of the innovation process has changed essentially. Traditionally the process was linear, meaning that all innovations had started from scientific research which generated inventions, advancing to applied research and R&D efforts, and finally reached the stage of innovation, when accepted by the market.

Now, instead of linear, the process is much more complex, flexible and less predictable, with the role of government being much more prominent than before. It is increasingly recognized that innovation plays a dominant role in economic growth, with practically all societal actors being involved. As the leading expert on the subject, professor Charles Edquist, from University of Lund established, linearity is rather an exception than the rule. He claims that the impact of the innovation ecosystem (referring to all legislation, policies, institutions and financial support) has become decisive for the innovative performance of a country. This awareness is gradually growing, making innovation more important than ever before! 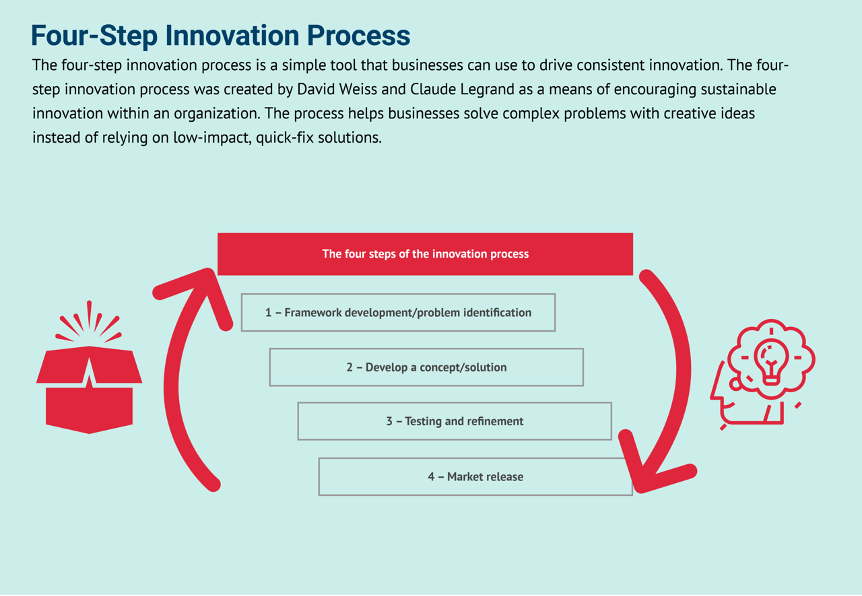 An innovation process is a set of steps between an idea’s conception and its implementation. It is a streamlined process that is managed in a way that reflects a company’s structure and innovation goals.

A strong innovation process helps to optimise the identification, and capture of the best ideas and bringing them to life. By following a process, and iterating and sharing feedback at every stage, you demonstrate to your entire team that innovation, and every single idea, matters.

Innovation is a collaborative process by which organizations abandon old paradigms and make significant advances. Innovative ideas come from several sources, including “unreasonable” demands or goals and time pressures. However, there are many blocks to innovation. An innovative idea is not helpful to an organization unless it is tested and implemented.

In the graph below we can see 5 ways to improve the innovation process: 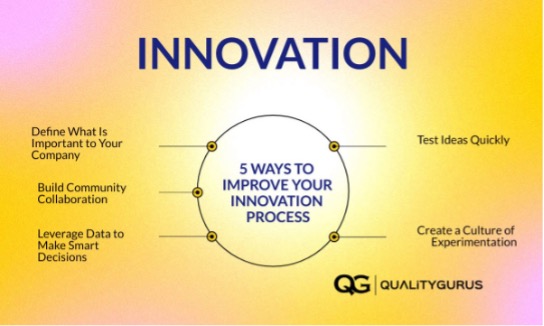 In spite of high risk in creating a company (20% of small companies fail within the first year, and 50% do not survive the first 5 years – according to US statistics), and there are 582 million companies operating in the world. In the US alone even 24 million people want to become self-employed, and after a period of 3 years 96% of company owners don’t want to leave and go back to be an employee.

This is typical particularly for the US, Canada and several Asian countries. It has been established that the most friendly entrepreneurial ecosystem is developed globally in US, Switzerland, and Canada.

Most of European countries are still developing lots of knowledge, but when it comes to innovation their performance is weaker than in the 3 above listed countries.

Why is that the case? The first factor is undoubtedly the volume of available financial resources, where Europe is simply unable to achieve what has been set as a strategic “Lisbon Target” already for the year 2010 (GERD – the Gross Expenditures on R&D was recommended to come to 3% of GDP), but unfortunately GERD is remaining well below the target – the EU average being 2%. In US, Canada and Switzerland, however, it is above 3%.

The second factor is the unsatisfactory efficiency of the innovation ecosystem. Let us illustrate this with only one indicator: availability of risk capital, which is in Europe 5 times lower (as proportion of GDP) than in the USA.

Despite hundreds of years of cross-cultural exchange, whether through bayonets or trade agreements, the European and United States startup worlds are part of vastly different ecosystems. The days of the mobile-powered "nomad entrepreneur" are arriving, offering new founders the chance to start companies far from home. When deciding on the place to get started, understanding the pros and cons of the two most attractive entrepreneurial continents is critical for the decision process. While Silicon Valley will tempt many freshly-minted entrepreneurs, the costs of living may make survival prohibitive over time. As investors grow their involvement in Europe on the tide of highly successful recent startups, here's what you should know about Europe versus the urban hotspots of the United States.

The ability to raise money is often pivotal in the success or failure for high-growth startup regardless of location. Other than in the US, most startup environments struggle with either limited or very diffused funding options, despite the rise of crowdfunding and presales. Europe has many strong players in seed and early stage funding, but is not blessed by access to growth stage funding.

The most important difference in startup approaches in Europe versus the United States is in a single question: revenue first or growth first? US startups compete in a giant market and need a high degree of market penetration in order to gain a competitive advantage over potential imitators. Hence, growth and traction are the main success factors as seen by both investors and startup founders.

The slower growth of European startups is also due to the diversity of Europe's markets. With the necessity to translate products into several languages, as well as building up partnerships in different countries, there growth is naturally bottlenecked by localization. In short: it is impossible for a marketplace, social network or other platforms to access all European countries at the same time. Since these tend to be the multi-billion dollar opportunities, it once again becomes clear why there are fewer Unicorns in Europe.

A more general factor is lack of entrepreneurial culture, which can be illustrated by the percentage of people considering to start a company – this is again very different in Europe than in the USA. It is interesting to compare the reasons stated by people opening a company: in USA 49% of new entrepreneurs declare they felt ready to do it and they wanted to be their own boss. Only 18% did it since they were fired or were dissatisfied with corporate America. In Europe the share of new entrepreneurs forced to open a company due to loosing their jobs is much higher.

Proper understanding of the modern innovation process and of the impact of the innovation ecosystem has become crucial for any country striving for intensive economic advancement. For various reasons – globally – this is a special challenge for Europe, which still produces about 30% of scientific articles, but has reduced its share in global innovation, which is now around 25%.

In terms of dynamics, North America and Asia are stronger than Europe. Just an illustration: during the period 2015 – 2020 while Europe increased its innovation output for 10%, the US did it for 15%, while China managed to increase it for 25%.

There are several problems: in fact, the EU is still far from acting in research and innovation area as “a union”, and – as long as it fails to connect and wherever possible integrate its innovation capacities – does not stand a chance in competing with China and the USA. With the steeply rising costs of research in strategically important domains, like artificial intelligence, biotechnology, and nuclear energy, the only way to stay competitive is closer integration – which is not happening.

The key reason for this is still poor understanding around Europe of the role of innovation, unfortunately also by the academic community, as well as by the governments. It took the European Commission quite a while to modernize its approach, and now it is making an effort to do whatever possible at EU level, and simultaneously encouraging member states to develop their innovation ecosystems in order to upgrade their innovative performance.

What are the solutions?

A successful innovative society is at the same time a well-functioning, entrepreneurial society – where people are interested and motivated to create value and satisfy other people’s needs. This may sound a bit simplistic, but it is not only a proven fact, but also extremely important, not just for the governments and policy makers, but equally for all members of a society.

Of course, governments are primarily responsible to develop an innovation and entrepreneurial environment and ecosystem. This is of course easier said than being done, but those preparing the regulations and proactive, support programs – which of course require some budgetary resources – need to be properly justified. It is recommended that governments learn from the best success models around the world, adapt instruments to their domestic environment, and do this in close collaboration with innovation and business actors. Following this approach, and investing all their energy into creating the most productive ecosystem, they cannot fail, and will be quickly rewarded by good economic performance, as well as by recognition from the innovation actors, and finally by the rest of the electoral body.

The responsibility of the innovation and business actors is to act legitimately and honestly, not abusing the support programs (being aware that in this case they are spending tax payers’ money inappropriately) and thereby endangering the future of these programmes. Such behaviour should be avoided, as it is counterproductive. Namely, if these support programs will be closed, these abusers and their companies will also be affected negatively. It is a matter of common sense, and an important feature of a healthy political culture. From disruption to transition
Are we ready?
Subscribe
Get updates on the Meer