The issues facing the elderly citizens Over the last half-century the average life expectancy in developed countries has advanced from about 60 to close to 80 years. Although this happened over two generations, most of the legislation in the domains of labor, social security and retirement has not changed appropriately. Therefore, people are still asked to retire at age of 65, while governments are simultaneously complaining that there is not enough resources in the retirement funds!? Unnecessarily millions of people are forced to live on modest or even very small pensions, instead of remaining active, enjoying solid income, and contributing to their country’s tax revenues.

Of course things do not look the same when various people are 65 and facing retirement: for a miner – being exhausted after having spent 40 years digging deep under the surface, or a university professor – who is feeling about 50 years – and in most cases became optimally skilled instructor some 20 years earlier, and could perform optimally in the following 10-15 years - but is forced to retire and usually leave the classroom.

These are just two extreme examples of a problem societies are faced nowadays, while attempting to offer to its senior citizens a more acceptable life than experienced today. There are two aspects of the problem: consciously wasting an increasing part of human capital, and the challenge to offer to senior citizens alternative activities, including support to the development of a “silver economy”. As we can see from the experience of some countries there are some solutions with promising results.

Both aspects of the problem have to be addressed: (a) human rights aspect: i.e.: helping seniors to remain active and fully socially integrated, as well as (b) human capital aspect: i.e.: creating conditions that this valuable part of societies’ human resources is not waisted.

As its name suggests, the Silver Economy is not a “market” but a cross “economy”. The population aging affects every market and industry, such as: home accommodation, transport, food industry, insurance, robotics, health and e-health, communications, Internet, sports and leisure. All these economic sectors and markets are starting to adapt to the ageing process.

Almost 70% of the European silver economy is in the following sectors – with the turnover values in 2015 (in millions of Euro):

One of the determinants of the progress of silver economy will be in technological innovation. Advances in home automation, Artificial Intelligence (AI), Internet of Things (IoT), eHealth, and other services typical of smart cities, arouse the interest of a public that is mature, but still too young to feel old.

Which are the main features of the consumers of silver economy:

The ageing population poses many challenges, including ensuring a good quality of life, well-being and supporting independent living for as long as possible, extending life expectancy, support independent living at home, adapting care institutions and providing tailored products and services. However, it is also an opportunity to create economic growth and improve the seniors’ health and quality of life.

Today, 80% of innovations in the silver economy are in the field of silver health. However, this field represents only 25% of silver economy companies. The challenge is therefore to support existing innovation projects in their deployment, but also to boost innovation in other sectors to restore a balance and provide solutions for all stages of senior development, from the active senior to the independent one, to those who need increasing assistance.

The silver economy still has many challenges to overcome today in order to become a true driver of the economy, but the economy of the future will be led by older people and will have - among others - the following qualities:

The economic potential of elderly people should serve to reinforce a cultural change and the very concept of ageing – being commonly associated with loss of faculties. To a certain extent, this is true: time acts on living beings by reducing their capacity to adapt and respond to the environment. However, we should not forget that ageing also brings gains in knowledge, wisdom, experience and generosity. Elderly people can stay active and be very useful to society - not only from the financial value perspective. In strictly practical terms, their income is taxed, they are spending, and they may carry out voluntary work that saves money for the government. Their professional experience and spending power could contribute to economic growth and development. We should stop thinking of elderly people as a burden, and learn to appreciate their contribution. In short, we should reconsider our notion of old age, recognizing that ageing can be problematic, but that it can also be for the society an important opportunity.

According to a study prepared for the European Commission the total value of Silver Economy in EU will reach in 2025 even 6.4 € trillion (in 2015 it was 3.7 trillion), and will offer 88 million jobs. In 2060 people over 65 will represent 1/3 of the total European population. The problem of aging is serious, affects most parts of society, and will grow in all parts of the world: for now particularly in the developed world, but very soon also in the developing world – where it is exacerbated by the high population growth.

The progress in addressing issues of aging society depends on successful activities in practically all domains of the public system: starting with general awareness of all aspects of aging, health and elderly care, engagement of government in creating regulatory environment introducing the needed flexibility in retirement system and taxes in case of reemployment, openness of the innovation ecosystem and entrepreneurship support environment, and many others.

Obviously, optimal results can be achieved if a country has managed to develop an integrated approach, and accepted representatives of the elderly as active and legitimate partners in discussing the available solutions. Given the complexity of the challenges, this is not simply a matter of proper legislation and policies – involving governments and parliaments. The elderly citizens themselves – being properly organized – have to be very proactive in all domains of policy-making and implementation, but also by making the society aware of the overall benefits of a proper system, and in particular mobilizing the elderly to be active in seeking the right solutions, and creatively applying the adopted measures and support policies.

Finally, the media need to be properly briefed, so that they can influence the authorities, as well as maintaining public support based on authentic understanding of all issues involved, including the benefits, not just for the elderly, but equally for the entire society. 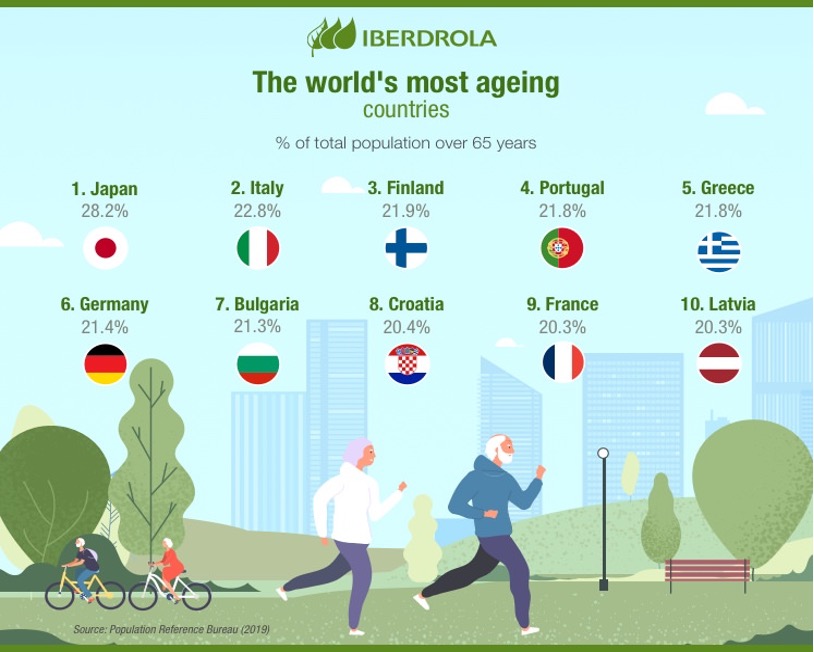 Infographic No. 1: The world’s most aging countries 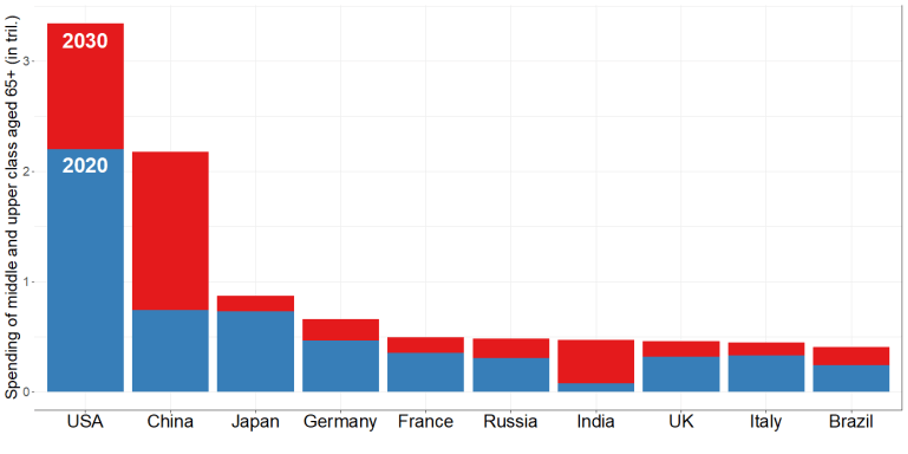