More countries than ever in the past have understood that knowledge and innovation are the key factors of economic, technological, and general progress of a society

As we tend to measure and compare our performance in various domains, and while knowledge society/economy has been accepted as an overwhelming priority, ranking countries in terms of achieving knowledge society and economy have become more important than ever.

Since 2017 the Dubai-based Mohammed Bin Rashid al Maktoum Knowledge Foundation is ranking in its Global Knowledge Index 154 countries by 232 indicators, and offers a very good picture.

The European Commission and the World Intellectual Property Organisation have been doing a similar global ranking with its annual Global Innovation Index.

Each ranking has its own characteristics, but – obviously - most of the indicators are covered in both cases, though in some cases with different ponder.

The result is that when comparing the top 10 countries in two rankings even 7 countries are there in both cases. These are: Switzerland, Sweden, the US (top 3 in both cases), and the Netherlands, Denmark, Singapore, and Finland.

And when we look at the top 10 in the 2021 Bloomberg Most Innovative country ranking, again the same is experienced: 7 countries are listed there in both rankings! So, these are undoubtedly the uncontested global leaders in building a knowledge society/economy.

It is very interesting, that the rankings in GDP per capita and in knowledge/innovation performance do not coincide fully and automatically – as one would expect. Obviously, besides the available financial resources to enable intensive education and productive R&D, something else is equally important. That is the determination of a government and the citizens to build the country’s progress on knowledge and innovation. And when this is the case, countries will climb up on the rankings, as it happened more recently so vividly with Singapore, Taiwan, and now with China. Not with the same intensity as in Asia, but this happened over the last 10 years also with a number of countries on other continents: Czech rep., Bulgaria, Brazil, Mexico, Peru, South Africa, Gabon and Kenya.

Innovation is actually the key for a country to become and remain competitive on the global stage. A country’s innovation includes its government, fiscal policies, education policies, and innovation environment (innovation inputs) as well as its patents, technology, business performance, and economic growth (innovation outputs).

Innovation is a major factor in determining which countries are the most economically and technologically advanced countries in the world. Which countries are the most innovative? The annual Bloomberg Innovation Index covers 60 nations using dozens of criteria grouped into seven metrics: research and development, gross value added by manufacturing, productivity, high-tech company density, researcher concentration, tertiary efficiency, and patent activity. While the Bloomberg analysis is ostensibly focused upon the innovation of a nation's economy, the categories are so broad and comprehensive - and economies are so deeply integrated into other aspects of life - that the analysis is often interpreted as a measure of not merely economic innovation, but innovation as a whole.

The 2021 top performer is South Korea, which reconquered the first place from Germany. Singapore and Switzerland, with Germany dropping to fourth place. Apart from Israel, which ranks 7th, the rest of the top 10 consists only of EU Member States: Sweden (5th), Denmark (6th and improving 2 places), Finland (8th), Netherlands (9th and improving 4 places) and Austria (10th and improving 1 place). These positive results illustrate the European innovation potential. The United States, on the contrary, dropped out of the top 10. Six EU Member States feature in the top 10 of the Bloomberg Innovation Index 2021, reflecting the strong European innovation potential.

In the Index's 2021 edition, South Korea regained the title of the nation with the most technologically advanced economy. South Korea’s best-performing metric is patent activity, for which it is ranked first in the world. South Korea ranked second for both research and development intensity and gross value added by manufacturing, fourth for high-tech company density, and third for researcher concentration. Not surprisingly, South Korea is home to companies such as Samsung, LG, and Hyundai.

Singapore ranked in 2021 as the second-most innovative country. Singapore's rise can be attributed to its rising productivity and manufacturing gains. Additionally, Singapore ranks third for gross value added by manufacturing, sixth for productivity, and fourth for patent activity. Singapore is also focused on education, with 91.09% of eligible citizens either enrolled in or having completed some form of tertiary education in 2021.

Germany, which ranked #1 in 2020, fell to the fourth spot. Full of well-known tech companies and countless new tech start-ups, Germany ranked third for its density of high-tech companies. Germany also ranked sixth for gross value added by manufacturing, which primarily comes from its car-making industry, and 7th for R&D intensity. Germany is most known for its engineering, home to Volkswagen, Siemens, and more. The government strongly supports research and development through both universities and business organizations. Additionally, Germany is now a global leader in medicine, military technology, and infrastructure.

Ranking fifth overall, Sweden invested SEK 155.5 billion (US$154 billion) in R&D in 2017, which helps explain why the country achieved 2021 rankings as fourth for research and development intensity, sixth for high-tech density, and seventh for both tertiary efficiency and researcher concentration. Following Sweden is Denmark, which ranks second for researcher concentration and eighth for both R&D intensity and high-tech density. The majority of research is done in the higher education sector and expenses are mostly allocated towards health services R&D. Additionally, Denmark ranks third in the world for productivity.

Israel ranks first in the world for both R&D intensity and researcher concentration. Israel’s large pool of STEM talent, entrepreneurial talent, and low costs of R&D talent have made it a competitive country in the global R&D market, with many U.S.-based clients. Israel even competes with Silicon Valley. Apple, IBM, AT&T, Samsung, GE, Paypal, Microsoft, and Motorola, are only a few of the many tech giants with an R&D presence in Israel.

Finland is a jack of all trades, ranking between 10th and 17th in the world in all seven metrics. The country excels in technology and high-tech solutions. Finnish innovations include the Linux operating system and text messaging.

The Netherlands entered the top 10 most innovative economies in 2021. But with rankings like seventh in the world in high-tech density, eighth in researcher concentration, and ninth in patent activity, it's easy to imagine the country hanging around in the top 10 for many years to come. The Netherlands is Europe's largest supplier of high-tech goods.

Rounding out 2021 top 10 is Austria, which ranks sixth in the world for R&D intensity and ninth for both manufacturing value-added and concentration of researchers. Austria's economy has numerous strengths, including its service, mechanical engineering, and organic farming sectors. The country is also characterised by favourable level of GERD efficiency – comparing R&D input and outputs.

The United States is the eleventh-most innovative country in the world. Home to Google, Apple, Facebook, Twitter, Tesla, Amazon, Microsoft, Intel, and countless other big successful corporations, the country ranks first in the world for its concentration of high-tech companies. The United States also ranks first for patent activity, being the leader in the protection of intellectual property. Home to world-leading technology companies, the United States is a powerhouse in global technology. Silicon Valley inspired and produced an entire generation of software engineers and technology companies, and is currently home to some of the world's biggest tech companies. The U.S. has made significant advances in space technology, pharmaceuticals, and telecommunications. The country also has the largest and most technologically advanced military in the world. However, the United States' scores for higher education decreased in 2020/21, particularly due to government's immigration policies affecting international students, and the way universities responded to the Covid-19 pandemic. As a result of several factors and policies, the U.S. economy fell according to Bloomberg’s ranking to eleventh place.

The graph below shows the closing gap in innovation ranking between the US and China: 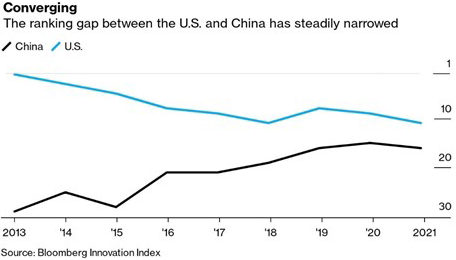 These opposite performances caused the gap between the two countries to narrow dramatically in the short period of 8 years.

The Global Innovation Index (GII) is a cornerstone of economic policymaking, with an increasing number of governments systematically analyzing their annual GII results and designing policy responses to improve their performance. Published annually, the core of the GII provides performance measures and ranks 132 economies on their innovation ecosystems. The Index is built on a rich dataset – the collection of 81 indicators from international public and private sources – going beyond the traditional measures of innovation since the definition of innovation has broadened.

While tracking the most recent global innovation trends, the new 2021 edition of Global Innovation Tracker, also focuses on the impact of the Covid-19 pandemic on innovation. The GII's overall formula for measuring an economy's innovative capacity and output provides clarity for decision-makers in government, business and elsewhere, as they look forward to creating policies that are expected to enable their people to invent and create more efficiently. According to GII ranking the world’s most-innovative economy in 2021 has been Switzerland, followed by Sweden, the United States of America (U.S.), the United Kingdom (U.K.) and the Republic of Korea. 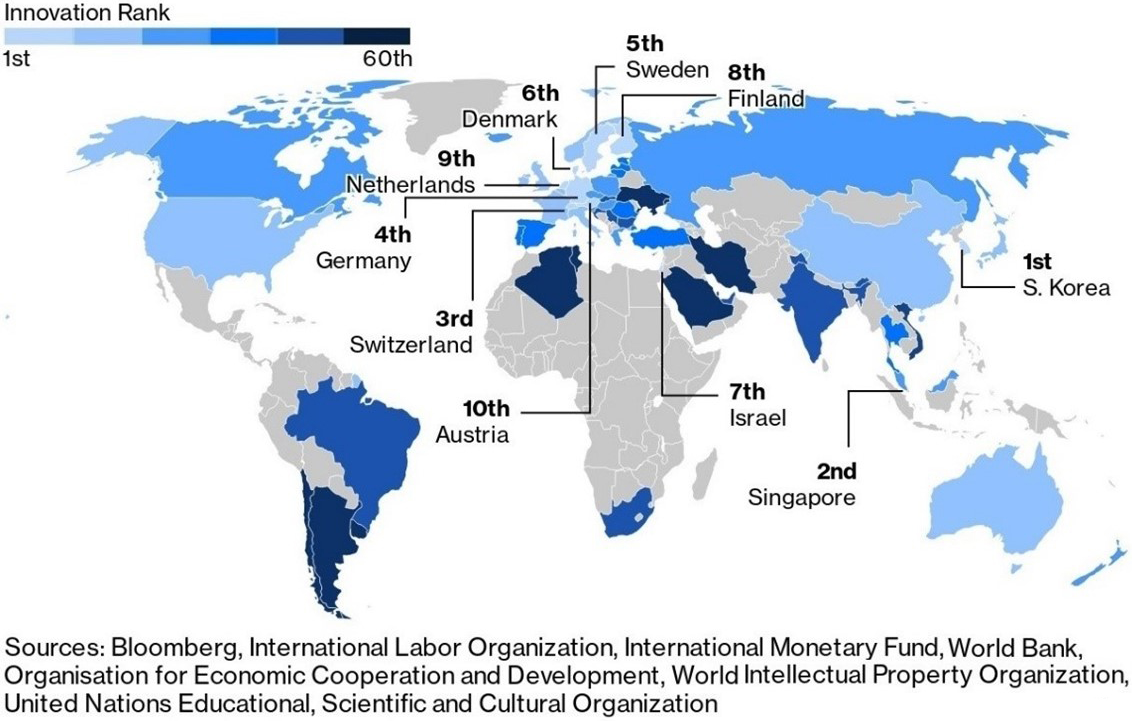 As mentioned above, the GII now includes an innovation tracker, which is a dashboard of some of the key dimensions of innovation, from investment volumes to technical progress, to socio-economic impact. This new component should improve the readability and applicability of the report, both at the local and international levels.

It is important to emphasize that more countries than ever in the past have understood that knowledge and innovation are the key factors in the economic, technological, and general progress of a society.

Some countries have organized themselves in a way that accepts knowledge as the pillar determining dynamism for change and progress. When that happens, it is equally important that a proper support environment has been created, which will encourage stakeholders to build on that basis, but equally investing their own energy, creativity and financial resources to reach ambitious and realistic targets in their own transformation and adjustment to the post-industrial, digital economy and society.

Let us emphasize, that the governments’ political will and commitment to create and maintain the innovation ecosystem - which helps in mobilizing all stakeholders - is absolutely important. As manifested by the countries’ leading innovation rankings, they all have built an efficient innovation ecosystem, through which they are supporting all innovation actors in their efforts to build their international competitiveness on newly developed knowledge and technology. In such circumstances the business-academia partnership – a vital component of the innovation efforts – unavoidably becomes the backbone of overall innovation processes. The other essential element is the quality and accessibility of the financial market, contributing particularly through availability and adequately favorable credit conditions for start-up and small companies. Many potentially successful innovations around the world never come to the market and remain in the laboratories, because they are denied the necessary financial backing.

No doubt, looking at global innovation rankings is certainly helpful in verifying the relative achievements among ambitious countries, and motivating the entire society to compete with other ambitious nations around the world. It seems that all, the governments, the innovation community, as well as the media in most countries could pay the rankings much more attention in order to create more interest and develop a stronger commitment to innovation as the principal tool for accelerating knowledge society/economy development.