Another lost decade in the fight against climate change? The next decade, 2020-2030, is crucial for the future of humankind. It is in our hands to address the current climate crisis. If we are not able to drastically and rapidly start reducing the global greenhouse gases (GHG) emissions during the following years, there will not be a turning back possible.

In this regard, the Nationally Determined Contributions (NDC) Synthesis Report presented last February 26th by the Secretariat of United Nations Convention on Climate Change (UNFCCC), allows us to glimpse that, with the state commitments, or NDC, currently on the table, we will have achieved in 2030 a minimal and ridiculous emission reduction. The report has thrown cold water on peoples' hopes, and it represents a reality bath, that should vaccinate civil society, world citizens, and the media from some speeches, in our view, illusorily optimistic that have nothing to do with what the resulting numbers from the present commitments indicate.

We will begin by putting in context the Synthesis Report to end with the main conclusions extracted from it.

After a year of a pandemic that has disrupted all schedules and spaces for meetings and negotiations on global issues, when the possibility that the COP26 in Glasgow could be held face-to-face next November began to emerge, some pulses and impulses about the current situation, and therefore about how to prepare for the Glasgow meetings/negotiations have started to take place. The year 2020 would then be the only one without international climate negotiations; let us keep our fingers crossed…

The latest analysis, and perhaps one of the most important and with more consequences, was the publication, at the end of February, of the NDC Synthesis Report that we talk about in this article. But before, it is precise and clarifying to contextualize its origin.

Suddenly everything is becoming worryingly clear.

The Paris Agreement does not specify emission reduction targets that countries should achieve. If this had been the case, the Agreement would have never been approved. The Agreement does set a stabilization goal for the increase in the average global temperature, saying that this increase should be below 2o C and that it will try to limit it to 1.5o C. This objective is very ambitious, and the scientific community has already been warning of this. It is also essential to ensure the ecosystems’ viability and, ultimately, the human species survival.

The same Agreement leaves in the hands of the States/Parties to decide on the emission reduction that they will carry out to achieve the goal mentioned before, which are reflected in the Nationally Determined Contributions (NDC) that Parties should prepare every five years.

In Paris it was opted to approve, as an international treaty, an Agreement that leaves on hands of the States/Parties the responsibility to achieve, or not, the temperature stabilization goal. The Agreement is just pie on the sky with an enormous risk that the target will never be fulfilled.

Those who were the “authentic architects of Paris 2015” were aware of this, and they hedged their bets, politically speaking, by taking a group of Paris Decisions approved in parallel to the Paris Agreement. At a legal level, the Decisions do not have the same status as the Agreement (which is an international treaty). However, they are at the same level as the agreements usually taken in all the COP. Seen today, we insist, everything is becoming very clear, especially if we textually read Decisions 17, 21, and 25 of Paris, 1/CP.21, which we quote next:

17) Notes with concern that the estimated aggregate greenhouse gas emission levels in 2025 and 2030 resulting from the intended nationally determined contributions do not fall within least-cost 2o C scenarios but rather lead to a projected level of 55 gigatonnes in 2030, and also notes that much greater emission reduction efforts will be required than those associated with the intended nationally determined contributions in order to hold the increase in the global average temperature to below 2o C above pre-industrial levels by reducing emissions to 40 gigatonnes or to 1.5o C above pre-industrial levels by reducing to a level to be identified in the special report referred to in paragraph 21 below;

21) Invites the Intergovernmental Panel on Climate Change to provide a special report in 2018 on the impacts of global warming of 1.5o C above pre-industrial levels and related global greenhouse gas emission pathways;

25) Decides that Parties shall submit to the Secretariat their nationally determined contributions referred to in Article 4 of the Agreement at least 9 to 12 months in advance of the relevant session of the Conference of the Parties serving as the meeting of the Parties to the Paris Agreement in order to facilitate the clarity, transparency, and understanding of these contributions, including through a synthesis report prepared by the Secretariat;

This last decision is cited, gathered, and concretized temporarily in Decision 1/CMA.2 from COP25 in Chile-Madrid, 2019 (the last one so far due to COVID); textually:

10) Recalls the request in paragraph 25 of decision 1/CP.21 to the Secretariat to prepare a synthesis report, and requests the Secretariat to make this report available to the Conference of the Parties at its twenty-sixth session (November 2020);

Furthermore, starting by commenting on this last decision, the UNFCCC Secretary notes as a presentation to the NDC Synthesis Report the following text (quote is again textual):

1) This report has been prepared in response to the requests from COP 21 and CMA 21 for the Secretariat to prepare a synthesis report on NDCs submitted by Parties. In view of the postponement from 2020 to 2021 of the United Nations Climate Change Conference to be held in Glasgow and the impact of the COVID-19 pandemic on the preparation of NDCs, the Secretariat informed Parties that it will publish two editions of the NDC synthesis report: an initial version by February 28th 2021, and the final version before COP 26.

The Paris Agreement sets its goal in the increase of temperature to stabilize, but:

In light of this pie on the sky, the “authentic architects of Paris 2015” transferred to the Paris Decisions the approach and the resolution of two equations, so to speak, necessary for everything to have some sense and some remote possibility of final success:

The GAP in emissions

It is not the objective of this article to comment on this UNEP report; however, it is necessary to verify in relation to it that, once the IPCC SR1.5 is published and taking into account that the NDCs can be consulted online, then “anyone” can do the aggregated analysis of the effect of the NDCs presented by the States/Parties and compare the GHG mitigation that the NDCs entail with the global target that, according to the IPCC SR1.5, should be without any doubt the worldwide reference.

The latest report from UNEP about the GAP in emissions practically says everything in the already famous figure that we attach below. This figure shows the enormous gap, around 32 GtCO2eq, that exists by 2030 between the unconditional commitments from the NDCs and the emission reduction path compatible with the temperature not rising more than 1.5o C. 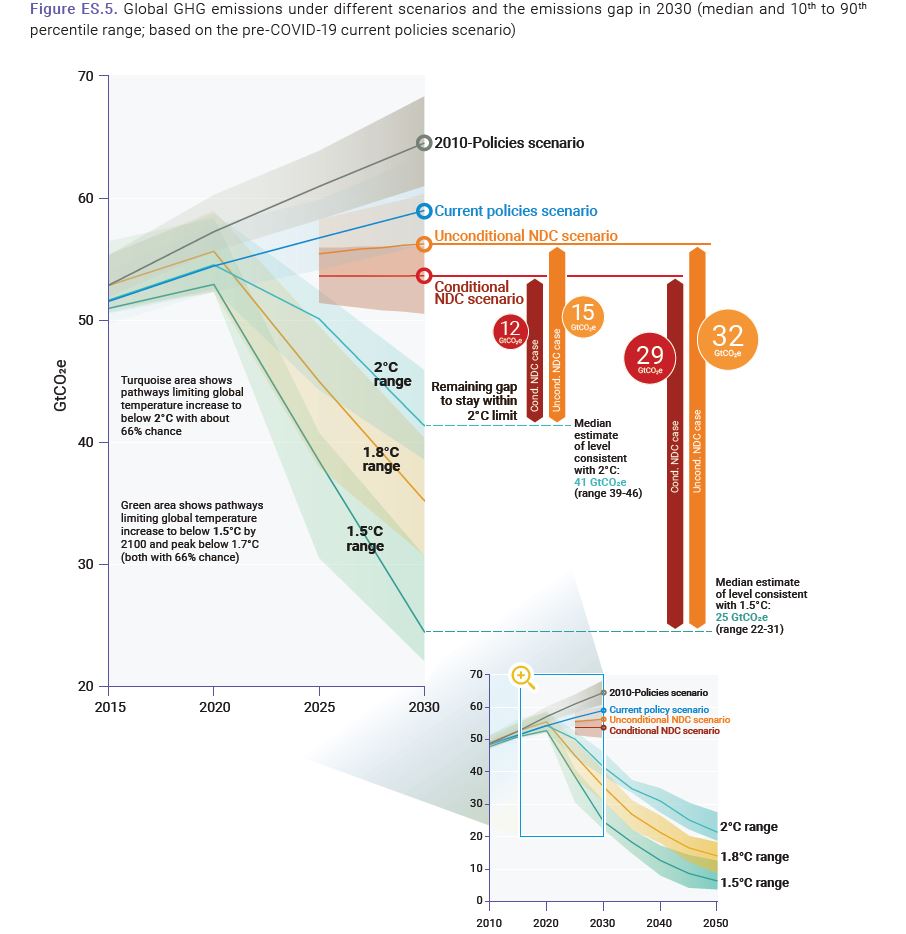 On the results of the latest Synthesis Report by the UNFCCC Secretariat from February 26th, 2021: “Nationally Determined Contributions, NDC, within the Paris Agreement framework”

The Synthesis Report presented by the UNFCCC Secretariat last February 26th does nothing but corroborate the content of the UNEP-PNUMA, and at the same time, it gives us a more updated image of it, considering all the NDCs submitted until December 31st of 2020.

It is important to underline that throughout 2020, the Parties to the Paris Agreement were called to update and increase the ambition of their NDCs. The objective of this report was precisely to visualize the increase in ambition accomplished. Nevertheless, by the end of 2020, only 48 NDCs that represent 75 Parties responsible for approximately 30% of the global GH emissions had been updated. Due to the pandemic’s impacts, it is assumed that the deadline to update the NDCs is extended until the beginning of COP26, in November 2021. For this reason, the Secretariat will present next fall (date to be defined) another report incorporating the latest updates and already with the evaluations of the total of the 196 Parties of the Paris Agreement.

At the moment, according to the Synthesis Report, the aggregate for the 48 NDCs updated during 2020 only increases 2.8% the emission reduction expected for 2020, compared to the previous version of them. In other words, the answer to the call to increase the NDCs ambition has only achieved, so far, a pyrrhic rise of 2.8%.

As if this was not enough, the report also concludes that the effect of the aggregated NDCs updated by the end of 2020 will only lead to a 0.5% reduction of the emissions in 2030, with respect to its values from 2010. Moreover, it recalls that, according to the SR1.5, in order not to exceed the 1.5o C threshold, the anthropogenic net CO2 emissions should decrease approximately 45% in 2030 with respect to the level of 2010.

No, this is not a joke, although it looks like one. In order to maintain the increase in temperature at 1.5o C, science tells us that, by 2030, emissions should be 45% below 2010 levels; and all political “efforts” States have laid over the table until now will only reduce them by 0.5%... as long as the commitments in the NDCs become a reality.

The situation is extremely discouraging. The emission reduction expected in the NDC for 2030 situate us very far from achieving the Paris Agreement’s temperature stabilization goal. According to the scientific community, if we do not achieve this goal, we will be placing the totality of the planet’s ecosystems in conditions never registered throughout the geological period in which our species has developed.

Throughout 2021 some States/Parties, which today are responsible for most GHG, have expressed their intention to increase the ambition of their NDCs. Among them is expected that the US will do so next April 21st at the International Summit of World Leaders in Climate Change convoked by President Biden. Also, China has expressed the intention to update its NDC, and perhaps so will India.

Of course, next fall we must keep an eye on the new UNFCCC Secretariat report, that will incorporate more updates. Nevertheless, all the news about the possible NDC updates from the US, China, etc., do not seem to go in the direction that will allow, even in part, to change the disastrous conclusions of this article. It seems that for many countries, it is easier to aim at the so-called “carbon neutrality” in the middle of the century than to undertake ambitious mitigation in the next decade. Needless to say, this takes much credibility from their speeches. In our view, to place the “carbon neutrality” target before the unavoidable action that should be urgently implemented is a great mistake that leads us to another lost decade in the fight against climate change. A grave error that we will discuss in our next article.

Therefore, much to our regret, if the figures of the current report are confirmed in September, there will be no room for hope.

(Article co-authored with Josep Xercavins i Valls, retired Professor at the UPC and former co-director of the GGC at the UPC, and with the collaboration of Cindy Ramírez Padilla, doctoral student at the GGCC at the UPC)