A letter to Greta Thunberg: is 5G an experiment on life? I am an engineer, not a biologist. Yet, I realize wildlife and biodiversity are the Earth’s greatest treasures and need to be protected. In previous letters, I discussed large-scale 5G networks’ energy consumption and climate impacts. I proposed more sustainable alternatives to 5G public networks. Today, I will report how 5G threatens ecosystems and biodiversity.

Every time I look into my telescope to gaze at Venus, Mars, Jupiter or Saturn, I realize our planet’s uniqueness. The Earth provides conditions necessary to create and sustain life: water, the atmosphere, soil, and liveable temperatures. Since the Earth’s creation billions of years ago, natural sources of electromagnetic energy from the sun and lightnings and the Earth’s magnetic field have bathed our planet. Over billions of years, life slowly evolved in relation to electromagnetic fields (EMFs). Living beings are affected by EMFs, including us, humans. We use EMFs for communication between our body cells. Science is only starting to discover the numerous roles of electric, magnetic and electromagnetic fields in biology.

Thousands of high-quality peer-reviewed scientific studies have reported adverse biological effects caused by man-made EMFs. Wireless technologies deployed in the last decades have added ever-increasing levels of EMFs to our environment. Check out this graph from The Lancet. It compares natural levels of EMFs (green area) with man-made sources since the 1950s. The red peak is caused by recent wireless communications technologies such as DECT cordless phones, Wi-Fi, Bluetooth, 2G, 3G and 4G. These technologies generate both the highest EMF exposure levels among all frequencies, and the highest increase compared to natural levels. Electrosmog generated by wireless technologies is already 1,000,000,000,000,000,000 times natural levels. 5G will add an additional layer of radiation. 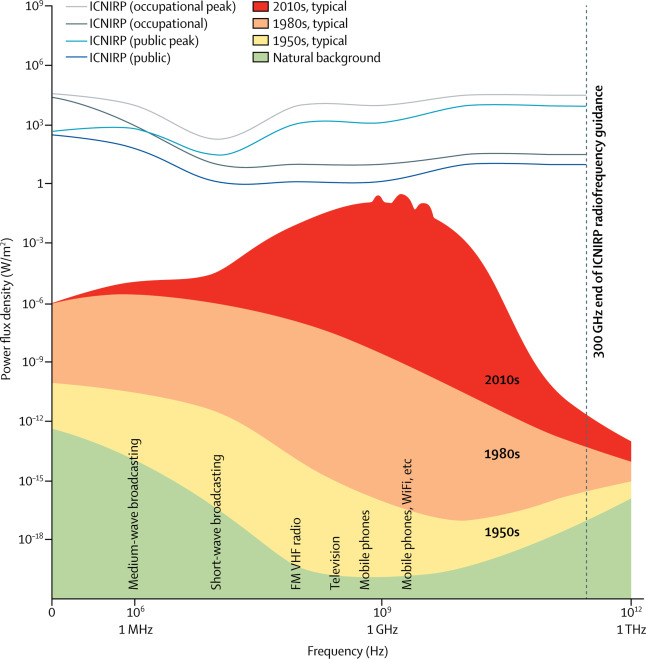 In Brussels, current electromagnetic radiation exposure levels are still below guidelines determined to be safe by an agency called ICNIRP, endorsed by the World Health Organization (WHO). Because 5G deployments will increase electromagnetic radiation significantly, the Belgian telecommunications regulation authority plans to increase allowable exposure levels fifty-fold. These levels are considered safe by the WHO. However, the Council of Europe and thousands of scientists and medical doctors have urged more restrictive exposure limits for decades. In 2020, one hundred Belgian students in biology and medicine requested a moratorium on 5G deployments because humanity’s survival depends on fragile ecosystems that 5G emissions would threaten.

How do insects respond to EMF exposure?

In Europe, eighty percent of bee colonies have already disappeared. Experiments exposing insects to man-made EMFs also show the production of stress proteins, a halving of fertility, lethargy, changes in flight dynamics, in the success of foraging (finding food), in reaction speeds, escape behaviour, disturbance of circadian rhythms, blocking of the respiratory chain and damage to mitochondria, misactivation of the immune system, increased number of DNA strand breaks, impairment of cognitive faculties, locomotion, learning, and total loss of memory with some irreversible effects.

German scientist Alain Thill reviewed 55 scientific studies about the impact of telecommunications’ electromagnetic radiation on insects: 83% of the experiments found significant adverse effects starting at exposure levels roughly 400 times below ICNIRP’s guidelines. Harmful effects can occur after a few minutes, or after several months of chronic exposure to lower levels, such as those emitted by 4G cell towers. Harmful effects after chronic exposure can be expected at levels as low as 10 milliwatts per square meter (mW/m2) i.e. 2 volts per meter (2 V/m) or 1000 times below the ICNIRP recommendation. Thill warns that exposure to 5G’s shorter wave lengths could cause yet more harm at a time when we cannot risk losing more insects. He urges more research, including about the interactions between electromagnetic radiation and other harmful agents such as pesticides—before we deploy new technology.

The same review, although recommending further research, states that some of the biological mechanisms leading to damages are indeed identified. In both animals and humans, EMFs affect voltage-controlled calcium channels. The opening of the calcium channels creates an influx of calcium ions through the cell membrane. Within the living cell, the high concentration of calcium triggers a series of biochemical reactions: increased calcium signaling and the production of free radicals, a source of oxidative stress.

How do EMFs alter navigational abilities of animals?

Scientific studies also show that EMFs disrupt various insects’ and birds’ navigational abilities using the earth's magnetic field (magnetoreception). Biologist Ulrik Warnke recalls that: “For many decades, research results showing that the natural electrical and magnetic fields and their variation are a vital precondition for the orientation and navigation of a whole range of animals, have been freely available".

Magnetoreception is the ability of animals, including insects and birds, to sense the magnetic field of the earth, used to find their way. Two molecules involved in magnetoreception have been identified to date: cryptochrome and magnetite. Cryptochromes can be found in the eyes and brains of most insects and vertebrates. It regulates the circadian (day/night) rhythm and it reacts to blue or white light, making it magnetosensitive. This suggests that artificial street light with a blue component can also have a toxic effect combined with EMFs. Since cryptochromes need light to enable insects to sense the Earth’s magnetic field, a different molecule, magnetite, is used when sensing is required by insects that are active after nightfall. Bees, wasps and ants for example should expect harmful EMF effects on their magnetoreception function even in the dark.

The already ongoing collapse of insect populations directly impacts the populations of animals that feed on them: birds, amphibians and insectivorous mammals, for example. The decline of pollinators has also consequences for the food chain. A considerable impact on agriculture has to be expected. A study estimated the economy dependent on pollination at 153 billion dollars in 2005 representing 9.5% of the world’s human food production.

How would EMF impact plants or trees?

Studies generally confirm even stronger harm of EMFs in plants than in animals. This could be explained by the exposure to radiation always on the same side of the plant or tree. Cornelia Waldmann-Selsam et al report morphological and growth abnormalities on trees, premature drop or change in colour of the leaves, or the death of branches due to exposure to cellular antennas.

Last but not least, in 2020, WWF published a plea The loss of nature and rise of pandemics warning humanity about the increased risk of pandemics (zoonoses) linked to the degradation of biodiversity. Should we not reduce risks of new pandemics as much as possible?

To operate 5G, the industry plans to use higher-frequency waves never used before by cell phones, called “millimeter waves” (mmW) in the range of 26 gigahertz (GHz). mmW is expected to be deployed in very densely populated areas with high mobile data traffic. 5G mmW could have a greater impact on organisms with high surface-area-to-volume ratios: insects, small birds, mammals and amphibians, could be severely affected. A study by Arno Thielens et al confirms an increased thermal effect of mmW on certain insects, which may have impacts on their behaviour, physiology or morphology.

Unlike animals, plants have developed large areas to facilitate exchanges with their environment. The leaves and reproductive organs of trees are highly exposed and strongly absorb mmW energy. Plants could therefore be particularly affected by 5G mmW radiation.

Millimeter waves (mmW), as their name suggests, are characterized by very short wavelengths. Absorption of mmW by organisms the size of a few millimeters can be strongly increased by a physical phenomenon called resonance when the animal (or a part of its body) is the same size as the mmW wavelength. As with thermal effects, plants and trees could suffer from these resonances. The resonance effects on plants and trees have not been assessed yet.

A review by Soghomonyan et al concludes that bacteria and other cells might communicate with each other by mmW. Bacteria exposure to mmWs impacted their growth, properties and activity. Waves could target water, cell plasma membrane, and genome in the cells. mmW change their sensitivity to different biologically active chemicals, including antibiotics. A combined action with antibiotics resulted in more strong effects that might lead to antibiotic resistance in bacteria. This could result in difficulties to treat infectious diseases caused by bacteria.

Also, the propagation of mmW is strongly hampered by the foliage of trees. The influence of trees on the propagation of 5G radiation, and in particular mmW, has been studied by the University of Surrey (UK) that suggests raising the pylons in order to limit signal attenuation by trees. In the absence of strict legislation, trees obstructing the spread of radiation have been and could still be felled, in the interest of telecom operators but to the loss of the environment. A UK government report also recognizes the problem of foliage for the propagation of mmW. The subject is controversial and has been raised in the British Parliament. Biodiversity is also a reality in cities and needs to be preserved. Trees in urban areas play an important role as animal habitats but also in air quality, carbon sequestration, and citizen well-being.

Claims that tree felling is being carried out for public safety or health reasons or for road improvement should be taken with great caution when they coincide with 5G antenna deployments. Press articles attempting to reassure the French population indicate that some trees had to be felled following the storms of 2012. Why then wait 8 years?

The effects of millimeter waves on animals and plants have been studied only minimally, at best. This makes 5G a very large-scale experiment on living organisms. Danish attorney-at-law Christian Jensen has explained that 5G deployments threaten several treaties that protect wildlife, including the EU directive on the conservation of natural habitats and of wild fauna and flora, the EU directive on the conservation of wild birds, on the precautionary principle as well as on the Bern- and Bonn-conventions on the protection of animals and plants.

Why would we risk life itself only for faster video downloading? The precautionary principle calls to wait for proof of 5G’s safety for ecosystems before deploying it in public networks.

Signs of destruction are already clearly visible. The 6th mass extinction of species, the first in 66 million years, is underway due to human activity at a dizzying rate. It comes with a catastrophic decline in populations of so far non-threatened species. 5G might accelerate even further decline and extinction rates, starting with small living things and plants.

With a dramatic explosion in exposure to electromagnetic radiation (including new millimeter waves), 5G public deployments would present serious and illegal threats to biodiversity, to the survival of ecosystems and to humanity. Human monkeypox outbreak
Monkeypox symptoms, recommended treatments and how to reduce the risks of transmission
Subscribe
Get updates on the Meer