The various avatars of self-reliance Over the last couple of months, India’s prime minister Narendra Modi has repeatedly emphasized the need for the country to move towards atmanirbharta, or self-reliance. Why this sudden awakening in a man who was till recently zipping around the world trying to attract corporations to invest in India, and doing little to reduce the country’s export-import dependence built up over the last few decades of globalized growth? Apparently, our little virus friend, COVID-19, has made him rethink. It is not only Mr. Modi - since global trade came crashing down in the wake of the coronavirus crisis, new wisdom seems to have dawned on many of the world’s political leaders.

One would not begrudge the origin or suddenness of this new realization, especially the fact that a tiny terror did what decades of social movements could not do if indeed this realization was well-directed. What does Mr. Modi really mean when he says “self-reliance”? What is he thinking of when he says: “Be vocal about local”? Does it match with the long-standing vision of Mahatma Gandhi who argued for swaraj, a combination of self-rule, self-reliance, self-sufficiency that starts, first and foremost, from each village? How does it square with the demands of many Adivasi (indigenous) communities in India who want to be left alone to carry on with their lives amidst natural ecosystems, or be enabled to take their own paths of well-being even when they want outside help, and not have alien, destructive “development” imposed on them? Does “make in India” necessarily lead to self-reliance?

Let's look at what Modi said. On 24 April 2020, celebrated as National Panchayat Day (panchayats being village-level councils of governance, elected by the residents), Modi proclaimed:

In an address to the nation on 12th May, Modi said:

Today the meaning of the word self-reliance has changed in the global scenario… it is about Human Centric Globalization rather than Economy Centralized Globalization. The culture and tradition of India speak of self-reliance and the soul is Vasudhaiva Kutumbakam (the whole world is our family). This is the culture which believes in the welfare of the world, for all the living creatures and the one which considers the whole world as a family. Its premise is the culture that considers the earth to be the mother.

Wordsmithing par excellence. But dig a bit deeper, look at actual policy decisions his government is taking, and one finds plenty of doublespeak. It is there even in the words: on one hand, he says: “The Corona crisis has also explained to us the importance of Local manufacturing, Local market and Local supply chain”, and on the other: “Today it is the need of the hour that India should play a big role in the global supply chain.” No explanation of how the two can co-exist, when in fact all experience of the last 30 years of economic globalisation have demonstrated their inherently contradictory nature. The global economy wants India to feed them whatever it can produce, and consume what others can produce, neither of which leads to local self-reliance. Since 1991 (when the then Congress Party led government ushered India into a globalised market), exports of fisheries and minerals from India have shot up, exhausting India’s marine resources and laying waste enormous areas for mining, disrupting the local economies of fisher, Adivasi, farmer communities. And imports of toxic waste (cleverly labeled as “used goods” as if the term will magically erase their hazardous nature) from countries that don’t want to deal with it themselves, have also increased, exposing millions of Indians to detrimental health impacts. How will India “playing a big role in the global supply chain” change any of this? And how does it move the paradigm away from “economy-centred globalisation” to “human-centred globalisation”, which Modi lauded in one of his speeches?

At another point, Modi says that one of the 5 pillars of India’s recovery and self-reliance, is “demand”: “The cycle of demand and supply chain in our economy is the strength that needs to be harnessed to its full potential. In order to increase demand in the country and to meet this demand, every stakeholder in our supply chain needs to be empowered. We will strengthen our supply chain, our supply system built up with the smell of the soil and the sweat of our labourers.” Moving imagery, but here lies the rub. According to a 2008 study by the CII and Global Footprint Network, India’s development trajectory is already unsustainable, using twice the biological capacity it has. If demand keeps increasing, and we keep supplying from wherever and however we can, we will only go further down this path of unsustainability.

A classic example is playing out right now: thermal power, and to feed this, coal mining. Self-reliance without asking the question of “how much demand”, and “what form of supply” leads to the stupidly simplistic solution, expand coal mining as much as possible so we don’t have to import coal. And to do this rapidly, the government is relaxing environmental and social safeguards, and making it easier for private companies to rush in. Auctioning of coal blocks is now taking place in some of India’s richest biodiversity reserves, as also in the habitat of some of its most sensitive Adivasi (indigenous) populations. If tens of thousands of people are going to be uprooted from their homes, forced to become migrant labour with no dignity or security, stripped of their age-old ability to be self-sufficient in forested or riverine or coastal ecosystems, how does this square with “local” self-reliance? Modi can celebrate the “sweat” of “labourers”, but neither his nor previous governments have done much to improve the working conditions of industrial and agricultural and municipal workers, especially women and marginalized sections like Dalits.

And how is this in any way following the notion of “Vasudhaiva Kutumbakam”, when thousands of species of animals and plants that have thrived in ecosystems to be dug up for coal, will be left without any habitat? And, oh, how is this being responsible towards the desperate need to tackle the climate crisis; can one say with one breath that the International Solar Alliance is tackling global warming (for which Modi got the UN’s “Champion of the Earth” award), and with the other, encourage enhanced coal mining and thermal power stations?

Such a view of self-reliance has no space for asking basic questions about what should be produced, by whom, for whom, and in what manner. And so on June 11th, when Modi addressed the Indian Chamber of Commerce and repeated the self-reliance mantra, he was essentially asking Indian companies to produce things in India… but with no mention of ecological and social consequences of existing patterns of production, nor any of the horrific inequalities caused by shameless profiteering by these companies. And lets also note that India is also trying to woo global companies away from China (where they don’t want to invest any more) and into India… again, feeding global supply chains.

In a way Modi is imitating what most governments continue to do (including unfortunately the revolutionary left-wing ones): follow a path of unbridled economic growth, infinite expansion of material and energy uses, even when it is abundantly clear that the earth cannot sustain it. To do this and yet talk about India’s responsibility towards the world, and about sustainable development, and harp back on ancient traditions of “Mother Earth”, is dangerous doubletalk. Says Modi about Indian civilization: “This is the culture which believes in the welfare of the world, for all the living creatures and the one which considers the whole world as a family. Its premise is the culture that considers the earth to be the mother.” Nice. Except, who encourages mining of the earth while calling her a mother?! (As an aside, Ecuador has gone through the same story, putting Mother Earth into its constitution, but continuing to encourage extractive industries, albeit state-owned).

It is also worth noting that while in May the Indian government announced a huge COVID recovery package (worth about 10% of its GDP), including significant allocations for small-scale industry, farmers, and other marginalized sections, analysts have shown that much of this is a clever repackaging of existing provisions. And the procedures for accessing the funds remain onerous and unlikely to be of benefit to the most marginalized. Also, it continued to levy crippling taxes on handlooms and crafts even though these sectors have repeatedly asked for exemptions to be able to compete with big industry (while Modi gains media brownie points by appealing to people to wear khadi, Gandhi’s favourite handspun cloth). Well over half of India’s population depends on agriculture, fisheries, pastoralism, forestry and crafts, and yet it has to compete against big industries and corporates who are enormously better resourced and much more powerfully supported by the state, including through crony capitalism. The government systematically ignores genuine attempts at self-reliance and community resilience, which is not surprising because a significant expansion of such initiatives will threaten the power of the state and of corporations.

Modi in fact heads a government that has viciously cracked down on dissent, especially those raising their voice against destructive development projects like mining, or against the politics of religious and caste hatred that right-wing organisations and parties (including his) have encouraged, or against military and police regimes and state surveillance imposed on places like Kashmir and north-eastern India. As I write, Adivasi organisations in central India have protested the auctioning of coal blocks. They have resisted mining, industries, and other destructive incursions into their lives for many years, and faced persecution and vilification by the state. It is ironical that Modi wants us all to be “vocal about local”, but when locals become vocal, his government calls them anti-national, and their supporters are labeled terrorists and jailed.

In an attempt to ramp up the economy as lockdown is slowly eased, several state governments (mostly run by Modi’s party BJP) have announced relaxations in labour laws. This includes forcing workers into 12-hour workdays, making it easier for businesses to hire and fire, and in general reducing the already weak rights that workers have. How does this square with the philosophy of “Vasudhaiva Kutumbakam”, or of the values of solidarity and happiness that Modi has espoused? Or was it a cruel interpretation of “self-reliance”, when tens of thousands of migrant workers left stranded by a sudden lockdown imposed in late March, were forced to walk back home, in some cases over a thousand kilometres (“don’t expect us to take you home, rely on yourselves”)?

Had he been alive, Mahatma Gandhi would have been on fast (after having this conversation with him !). But it is doubtful this government would have cared. It let Swami Gyan Swaroop Sanand (or Prof. GD Agarwal as he was known as one of India’s foremost pollution experts) starve to death, ignoring his 112 day fast to seek urgent attention to the Ganga (polluted, diverted, dammed to death)… a river that right-wing Hindutva organisations in power regularly pay religious lip-service to. These groups contain many members who consider Gandhi’s assassin, Nathuram Godse, as a martyr and Gandhi as a traitor. So it would probably have simply ignored the Mahatma, even as it appropriates his image and legacy to adorn its pet schemes and projects like Swachh India (“Clean India”).

Governments and corporations of the world have co-opted some of the most revolutionary ideas and worldviews in history, for their own ends: buen vivir, sumak kawsay, swaraj, ubuntu, sustainability, inclusiveness, socialism, democracy, and many others. The Indian government joins the ranks, with its flagrantly distorted use of “self-reliance” to greenwash a business-as-usual, exploitative, extractivist, and iniquitous path of development. 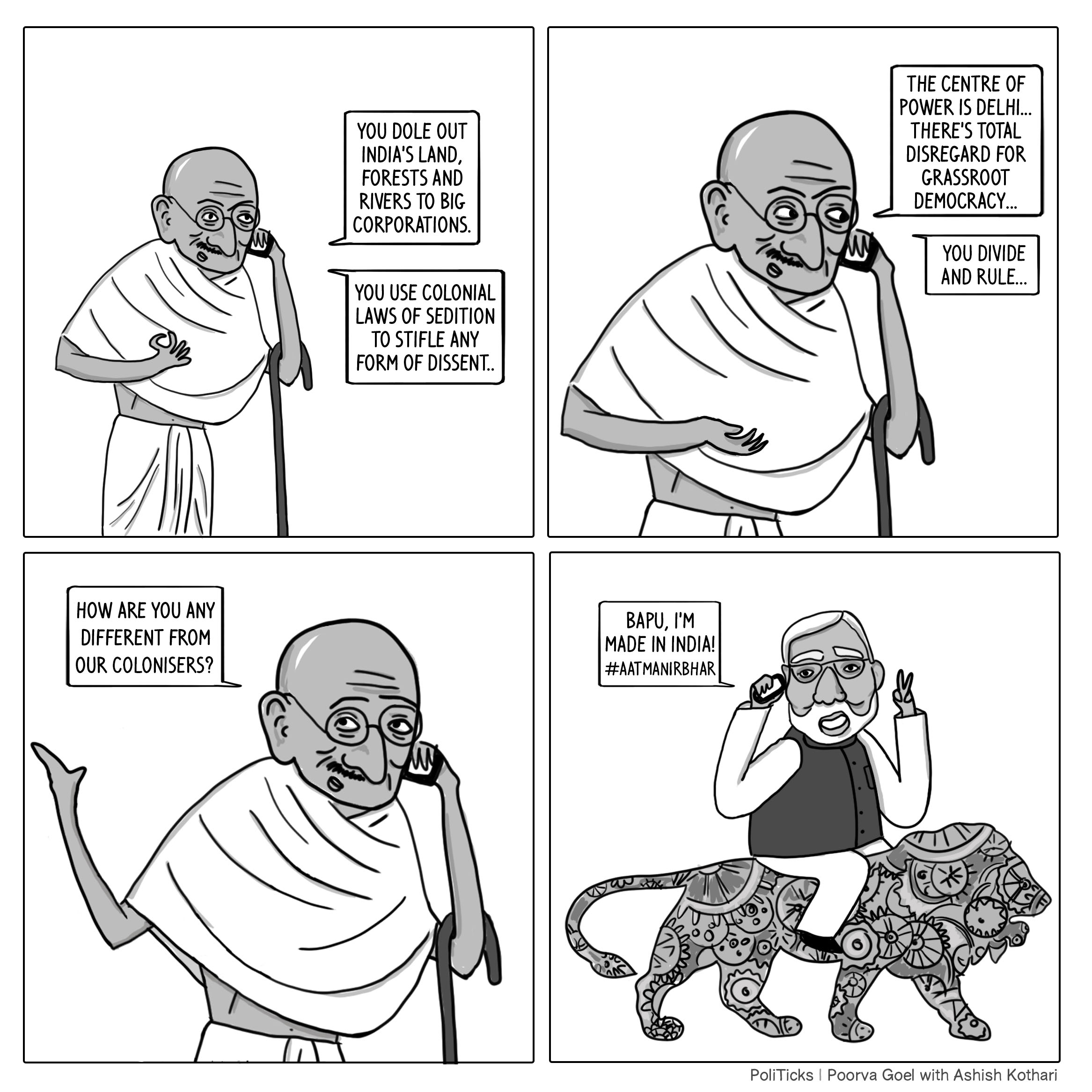