Women in art and fashion A woman can be overdressed but never over elegant.

With the heat wave spreading across Europe and other parts of the globe, museum hopping may be a refreshing solution to beat the summer intensity. Fortunately, Tokyo never runs out of exciting events. This season, several exhibitions focus on female artists’ and designers’ creative power in the development of art, design and fashion, and themes that inspire portrayals of women.

One of the most influential female fashion designers of the twentieth century, Gabrielle “Coco” Chanel has stood as a powerful icon for many women for her bold simplicity, individualism and free spirit. Mitsubishi Ichigokan Museum is presenting Gabrielle Chanel, Manifeste de Mode until September 25, the large-scale touring exhibition based on the same showcase launched at the Palais Galliera, Musée de la Mode de la Ville de Paris. The show serves as the first retrospective dedicated to Chanel’s work in thirty-two years.

Chanel’s early career as a milliner before she opened her boutiques in Deauville (1912) and Biarritz (1915) was inspired by the aura of liberation she had witnessed in the upper-class social life. She felt compelled to refrain from conventional, fussy constrictive fashion, and instead introduce more comfortable, functional and simple lines, which accentuate the youthfulness and naturalness of the body. She was known for her inventive usage of lightweight fabrics, including silk, satin, crepe and tulle, and palette of flower prints. Later, she added embellishment techniques, such as feather and bead work. From 1954, she became highly recognized for her delicately tailored suits with pockets, shoulder pads, darts or collar, and tweed bouclé edged with braids.

Her bag designs have also been marked for the quilted flap and metallic chain strap. A wall display of Chanel perfumes and glass-encased precious jewelry designs also captures the dynamic designer’s epitome of “modernity and chic.”

Perhaps, there could be no young female fictional character more lovable than Alice of Alice in Wonderland. She moves both children and adults with her sensibility and confidence, yet spiritful curiosity and persistence in exploring a new world she had never known before.

Running until October 10, Mori Arts Center Gallery presents Alice: Curiouser and Curiouser, a huge exhibition collating a wide range of genres, such as art, design, movies, music, fashion, theater, and photography from the nineteenth century to the present day to illustrate over 150 years of fascination for the charming universe of Alice. The showcase is largely based on the original exhibition staged at London’s Victoria and Albert Museum by renowned theater designer Tom Piper.

Starting from the history of the 1865 English novel Alice in Wonderland by Lewis Carroll, the exhibition outlines young Alice’s fantasy adventures through classic illustrations by the book’s illustrator Sir John Tenniel who also created the drawings in “Through the Looking-Glass and What Alice Found There,” published in 1872.

Visitors can immerse themselves in installations, artworks and video clips from numerous past movies of Alice in Wonderland, including the popular live-action and animated productions by director Tim Burton (2010 and 2016). Wonderful film and theatre posters and art pieces by Salvador Dali, Joe E. McHugh, Peter Blake, Yayoi Kusama, Kuniyoshi Kaneko, Komako Sakai, and many more fill the galleries with abundant colors.

Born in the Netherlands and one of the leading masters of Fauvism, Kees Van Dongen was highly acclaimed for his dauntless brushstrokes reminiscent of Neo-Impressionism, brilliant, saturated, and highly expressive color schemes, especially in women portraits.

Panasonic Shiodome Museum of Art is showing Kees Van Dongen: From Fauvism to Les Années folles until September 25, the artist’s first solo exhibition in Japan in 44 years. It covers Van Dongen’s career background, from his studies of color and form in the years leading up to World War I, to his focus on portraiture marked by slim and elongated silhouettes, grace, slenderness, and sensuality. Beautiful works gathered from around Japan and the world encompasses Neo-Impressionism, Fauvism, Post-fauvism, and the Années Folles of the 1920s.

Van Dongen moved to Paris in the late 1800s, established his own studio in Montmartre, and was highly influenced by Henri de Toulouse Lautrec. Like Lautrec, he flocked social circles amid la vie Parisienne, particularly around Montmartre and Montparnasse, which introduced him to the fashionable styles of women. He participated in the Salon d'Automne exhibition in 1905 alongside Henri Matisse, André Derain, and other outstanding painters. He emphasized the modern and liberated qualities of women reflected in rouged faces and feminine body contours. Whether the portraits displayed a sophisticated dress or captured the nude, they always projected profound colors and illumination.

One of Van Dongen’s remarkable paintings highlighted in the exhibition is Amusement (1914). The female figure is said to disguise the artist himself holding a palette and paintbrush. The model is shown painting Van Dongen’s portrait Mademoiselle Miroir, Mademoiselle Collier et Mademoiselle Sopha. Her slim pose mirrors the figure in the painting as though they converge in the same space.

Throughout history, women artists and designers, compared to their male counterparts, have been often overlooked and undervalued, despite the female subject occupying a prevalent place in the artwork itself. Challenges brought about by gender bias hopefully subside as our modern era recognizes the immense value and empowerment of women, particularly in the aesthetic fields. 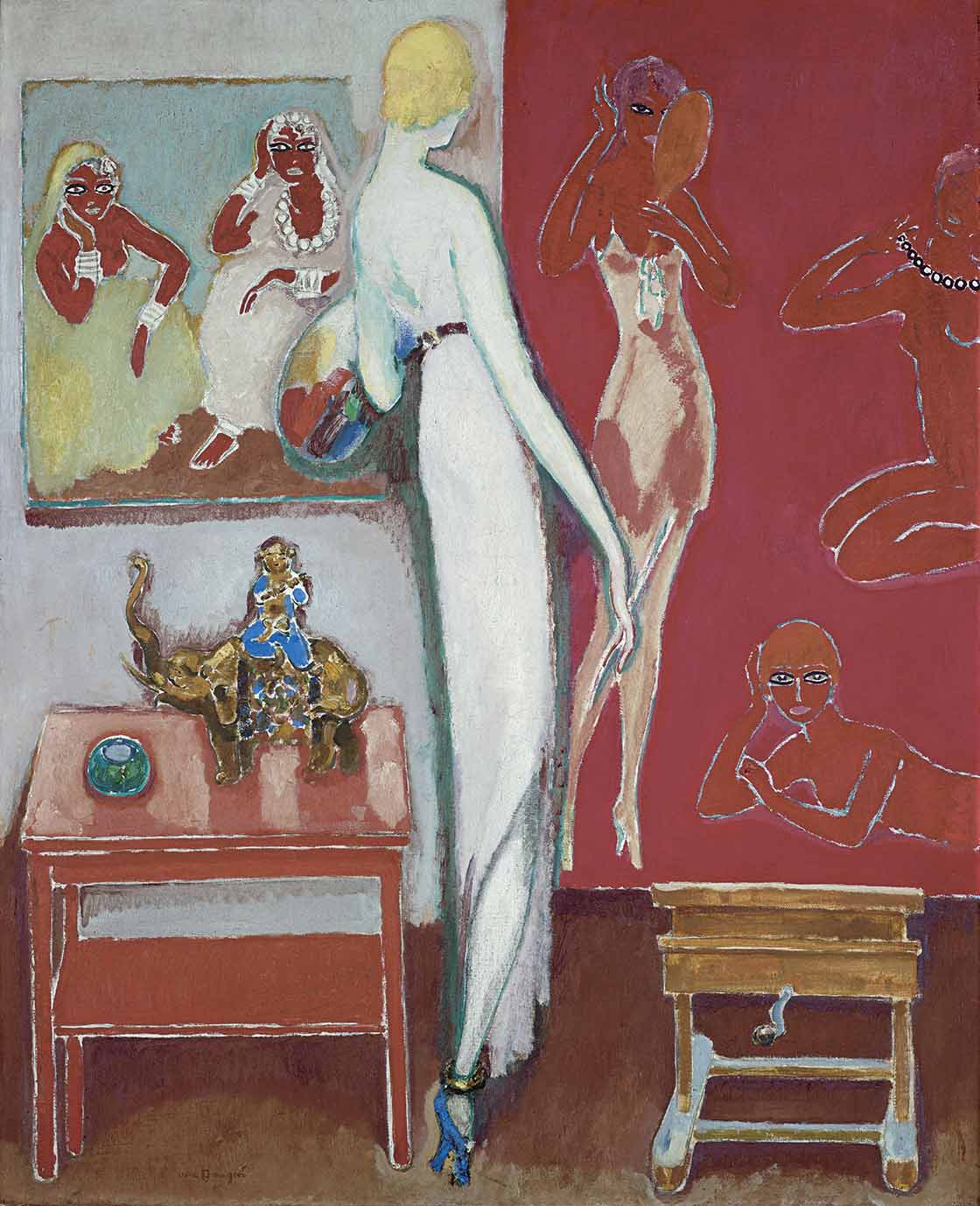