Brazil: hunger is back

Why is one of the world's major food producers suffering from large scale hunger? Going hungry in Brazil: a moderate reduction in inequality would be enough to ensure that people live well

We live in a country that produces a lot of food yet has many people starving. Apart from the ethical scandal, this is an aberration in terms of economic and social organization. On the moral and ethical level, it borders on the criminal: 19 million people are starving, of which 25% are children, and 116 million suffer from food insecurity — over half the population. Brazil produces over 3 kilograms of grain alone, per person, per day. A few years ago, Brazil had been taken off the FAO hunger map, following simple measures by the Lula and Dilma administrations. I begin this reflection on the ethical side because it is indignation that mobilizes us, and it seems that in the Academy we must maintain a certain appearance of neutrality. Hunger does not admit neutrality and, in legal terms, considering our constitution, a government not taking any measures to ensure the population's basic access to food, when food exists and in abundance, is at the very least prevarication. There are no arguments when children starve.1

I worked for seven years in Africa as a consultant for the United Nations, and I got to know countries where hunger was a direct result of poverty, of a general lack of resources. This is not the case in Brazil, where a GDP of roughly US$1.6 trillion dollars, equivalent to US$7,500 per capita, should ensure that basic needs are met. A simpler way of presenting these figures can help: dividing GDP, the sum of goods and services produced annually by the population, shows that Brazil produces the equivalent of US$2,500 dollars per month, per family of four. A sum that, were it not for the brutal concentration of income and wealth that we have, would allow everyone a dignified and comfortable life. A moderate reduction in our inequality would be enough to ensure that people live well. Brazil's central, structural problem is not economic. It is a problem of political and social organization. And there is no democracy that works with the degree of inequality that we have. This is a democratic farce.

Understanding this context is important to understand the return of hunger in Brazil, and in such dramatic dimensions. In 2022, only two sectors of the economy are dynamic: finance, in its different modalities, and the export of primary goods, which largely constitutes a decapitalization of the country in favor of commodity intermediation groups. The radical explosion of hunger and food insecurity is directly linked to both: the appropriation of resources by financial groups reduces the purchasing capacity of the population, which cannot pay for food, and the export of food by the agroindustry generates a shortage in the market and the uncontrolled rise in prices. Economic policy was disconnected from the interests of the nation.

In the era of control of agricultural products by major commodity traders, the logic is one of profit. Their control over economic policy led to a depreciation of the real, which favors exports in relation to the domestic market. In 2010, for example, one dollar of exported product returned 2.5 reais to the exporter. Today, with one dollar of exports, he earns 5.5 reais. The interest in exporting practically doubled. And since 1996, with the Kandir Law, production for export is tax-exempt. “Export is what matters” (exportar é o que importa), is what they proclaimed at the time. In other words, producing food for the country's population was taxed, but not when it was for export. This tax system further reinforces the deformation generated by the exchange rate. Add to that the weakening of the population's purchasing capacity, and the rise in prices, and we have a complete crisis.

In Brazil, considering the volumes of food produced and the amount of land available, the process is aberrant, but actively supported by a government determined to favor bankers and traders. Caroline Oliveira, in Brasil de Fato, shows how this is a policy: “cattle farming and soy were the activities most financed by the National Program for Strengthening Family Agriculture (Pronaf) in 2020, accounting for 59.9% of resources, followed by production of corn (14.4%). Meanwhile, only 2.53% of Pronaf Custeio Geral resources were allocated to the production of rice and beans.”2

The IBGE, the national statistics institute, in the chart below, shows the priorities of Brazilian agriculture. “Soybean is the crop with the highest production value in Brazil, followed by sugarcane, corn and coffee.” Food products like beans and rice are among the “others.” 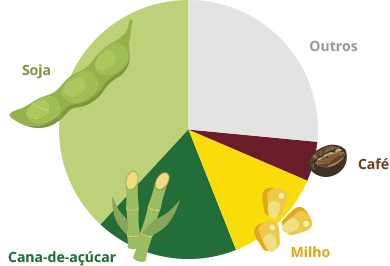 It is important to point out that the malnutrition of children, affecting millions in Brazil, in addition to the human drama, will have a structural and long-term impact. “Malnutrition is associated with a greater recurrence of infectious diseases, impairments in psychomotor development, lower school performance and lower productive capacity in adult life. Adults who were malnourished as children are at greater risk of developing cardiovascular disease, diabetes and obesity.”3

The deformation is planetary, although in Brazil it has reached aberrant proportions. The 2021 UN Food Systems Summit (UNFSS) led to the following comment from the Food Systems organization: “industrial food systems, global supply chains and increasing corporate control of food governance are responsible for the inextricably interconnected and existential threats faced by our populations and planet, including the climate crisis, deforestation, loss of biodiversity, land and ocean degradation, air and water pollution, hunger, marginalization, and countless human rights violations. An extractivist development model centered on corporate control of resources, policy debates, and regulatory processes has produced a global food system that has most recently left over two billion people under-nourished and economically destitute. Furthermore, ultra-processed industrial products cause malnutrition, diet-related noncommunicable diseases, and obesity.”4

The FAO report on The State of Food Security and Nutrition in the World 2021 shows how the drama is growing. “While the global prevalence of moderate or severe food insecurity has been slowly on the rise since 2014, the estimated increase in 2020 was equal to that of the previous five years combined. Nearly one in three people in the world (2.37 billion) did not have access to adequate food in 2020 – that’s an increase of almost 320 million people in just one year.”5

Corporations insist we consumers must learn to behave. “It’s what oil companies came up with when they invented the idea of the “carbon footprint” – i.e. your footprint on the biosphere, not theirs. It’s the displacement of responsibility strategy: since it’s a free country, nobody’s forcing you to do the thing that’s bad for you. Childhood obesity is the responsibility of the child or of his or her parents. Alcoholism happens because you don’t “drink responsibly”. Radicalization of the mass shooter is not YouTube’s responsibility. It’s always your fault, not that of the manufacturer of the addictive product.”6 But the broader challenges clearly point to corporate behavior.

The data is dramatic, and goes far beyond hunger. A look at data from the World Health Organization reveals that the tobacco industry generates 8.2 million anticipated deaths, 7 million from direct users and 1.2 million from passive exposure. Air pollution, linked to energy and other options, leads to 4.2 million deaths a year, water pollution another 3.6 million. Obesity kills about 5 million people, and causes loss of quality of life for hundreds of millions. Cancer kills about 10 million people, largely as a result of cigarettes, but also of pesticides and so much uncontrolled chemical use. The companies that cause these deaths know perfectly well the numbers, and the causes. But the priority is to get more profits and dividends for shareholders, large financial groups. They all subscribe to the ESG principles. Do you remember how many years it has been and what battle to get lead out of fuel? Or for tobacco companies to acknowledge that they knew about the link between cigarettes and cancer? Are those who contaminate water and food with pesticides uninformed?

It is a planetary system that reflects, for many countries, the reproduction, in the 21st century and with much more advanced technologies – both in production, commercialization, transport and financial drain – of what has been correctly described as techno-feudalism, neocolonialism, or more precisely extractive capitalism. Essentially, a planetary structure of corporate exploitation was generated, with financial giants such as BlackRock, Bunge, Glencore and the like orchestrating the ensemble. At the global level, it is important to note that three private asset management groups, BlackRock, State Street and Vanguard – financial intermediaries and not producers – manage US$19 trillion dollars, equivalent to the GDP of the United States (US$21 trillion dollars).

Economic power on this scale becomes political power. Robert Reich, who was Clinton’s minister of labor, gives the gist: “as early as 2012, more than 40% of all money spent in federal elections came from the richest of the richest – not the top 1%, not even the top 1% of the tenth of this 1%, but the top of the 1% of the 1%.” In Brazil, bankers are in direct control of the Ministry of Economy and the Central Bank. The Ministry of Agriculture is in the hands of agro-exporters. Local agriculture linked to local or regional markets still subsists, but is being overrun by the world-scale commodity production. According to an Oxfam research report, “the major traders, Archer Daniels Midland (ADM), Bunge, Cargill and Louis Dreyfus, collectively known as the ABCD traders, share a significant presence in a range of basic commodities, controlling, for example, as much as 90 per cent of the global grain trade.”7

In this international system, where global and national financial interests are deeply interwoven with the interests of agribusiness, timber exports and mining, as well as the central government, Brazil is simply being drained. The rescue of economic common sense and the return to Brazil without hunger implies, therefore, not only adequate internal policies, but also the rescue of the sovereignty that we lost with the 2016 coup. Hunger in Brazil is not an accident, it is a policy centered on corporate interests, with a government at the service of a system that has little to do with sustainable development.

In Brazil we produce food but people go hungry; in the United States corn is used to produce bio-energy for cars and soy is used to produce more meat, worldwide one third of food is lost by mismanagement. It is a mess, but it does generate huge profits at the top of the pyramid, the commodity traders and the asset management industry. The technical means are certainly advanced, but the outcome is a human disaster.

The key link that once made free markets profitable but useful is broken.