The Princonser method and innovation in research Oxford University: universities will be the new training centers of universal wisdom

In the age of knowledge, universities enter a stage of innovation in response to the new challenges of the 21st century. The fundamental purpose of the university is the creation of knowledge. The way to create knowledge is research. The main instrument of research is the scientific method. The scientific method has been successful in the natural sciences, however the same result is not seen in the human sciences. Reason why: in the 21st century we have human problems still unresolved. Paradoxically, we live in the age of knowledge and technological development with destructive and self-destructive human behavior. We are facing two situations, either the scientific method is not applicable to the human dimension or we need to innovate the method.

This new reality is a new challenge for universities. To overcome this challenge, universities must direct their objective towards the innovation of the method to promote research.

The current limits of research

Before analyzing the limits of research, it is necessary to identify and differentiate the fields of knowledge and research:

The criteria to determine the limits of scientific research are: the foundations, the research method, types of research, and the results of the research.

At present, the scientific method is used for both the natural sciences and the human sciences. The scientific method has been successful in the natural sciences, however it has failed in the human sciences. In the field of philosophy, there is also evidence of a backwardness in research, for this reason, the innovation of the method is expected to respond to global problems.

The results of the investigation

In the field of natural sciences, technological development is seen as a result. In the field of human sciences, positive results are not appreciated, the evidence of this is the unresolved global problems of the human being, and with a tendency toward self-destruction. 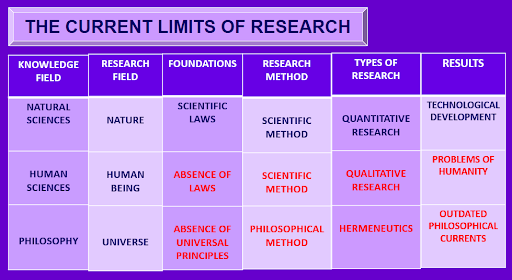 The Princonser method and innovation in research

Innovation in the foundation

Innovation in the research method

Innovation in the types of research

The types of research arise with the innovation of the Princonser method. So we can have philosophical inquiry and scientific inquiry. Scientific research at the same time would have a subdivision in quantitative research for the natural sciences and for the human sciences, due to its complexity, scientific and philosophical research would be shared.

The results of the research 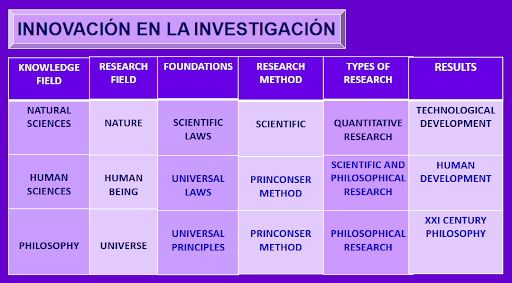 Expected results with the princonser method

There are three types of results to be expected, as follows.

Human development has stopped and has taken the path to self-destruction. With the innovation of the research method we can embark on a new path of human development, since the Princonser method is a philosophical instrument applicable in science. Research in the human sciences has been held back only by lack of innovation in method. The implementation of the Princonser method will lead to the progress of universities through research. Universities are the ideal institutions to solve the world's problems through knowledge. Knowledge of the human being is the basis for human development.

The Princonser philosophical method allows us to integrate efforts towards an objective that requires the conservation of the beings of the universe, therefore, it takes as its foundations the universal essence and universal principles.

The new ranking of universities

Articulation of the university with the national and world reality

Currently, the research works have as their main purpose to obtain the academic degree, for this reason there is no requirement of research based on the results, considering that the results are the creation of techniques. With the innovation of the research method, the problem of disarticulation of the university and human problems is overcome. The so-called era of knowledge will end in the new systematization of human knowledge, which will be the basis for the formation of the planetary consciousness. A planetary consciousness will be the basis for the integration of humanity.

The university and its Princonser Research Institute

Thus, the implementation and application of the Princonser method requires an institution with philosophical, academic and administrative support. Said institution will be known as the ‘Princonser Research Institute’. Each university must have such an institute to give it formality, autonomy and development in the production of knowledge through research.

Thus, the purpose of the institute is to innovate methods and promote research in all fields of knowledge. Stem cells
Are they the future of modern science?
Subscribe
Get updates on the Meer