The emotional cost of inequality Poverty: there is plenty of economic data, but the emotional cost of being stuck in the poverty trap has received less attention

The inequality issue goes much beyond poverty and lack of access to basic goods and services. It is also about the feeling of inequality, the humiliation and frustration of being left out of the main trend, of being deprived of opportunities.

Inequality is exploding in the world. We presently have all the necessary statistics on our global dramas. It concerns inequality both within-countries and between countries. Income as well as wealth inequality. More recently we have studies on education inequality, growing in importance in this knowledge-centered age. The Human Development Reports present multidimensional inequality data. A still significant global research by the World Bank, Voices of the Poor, has shown that the poor tend to stay poor, because it is not a question of lack of initiative, but of opportunities. Billions are locked in the poverty trap resulting from structural inequality. Insofar as our future as humanity is concerned, it is our main challenge, directly linked to the environmental disaster. 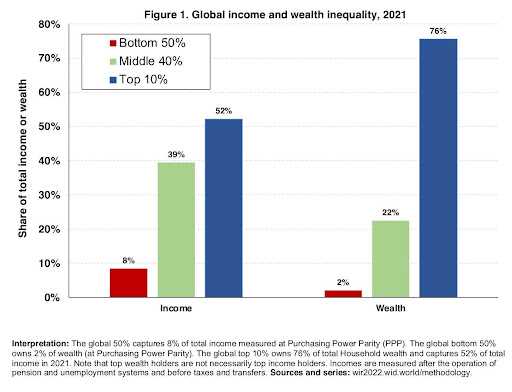 The trend is self-reinforcing, since the poor have no possibility to generate the conditions to improve their lives. Wealthy people can improve their access to education, to information, they can invest in financial papers, buy homes and avoid paying rent. The personal income surplus of the wealthy allows them to generate more surplus, while the poor barely manage to get to the end of the month. This leads to exponential inequality growth. The figure above shows that the 4 billion people at the bottom of the social pyramid have very little access to income (8% of the total), but an even more ridiculous access to household wealth, just 2%. A billionaire with barely one billion dollars invested in papers yielding 7%, is earning $190,000 dollars a day, in the so-called financial snowball effect. No need to produce anything, just let the money work. Courtesy of the financial rentier system, BlackRock, Vanguard, State Street, Crédit Suisse, Goldman Sachs and the like in the asset-management industry.

We have all the necessary information about this strictly economic impact of inequality. What has received less attention is how people feel when they clearly have become outcasts, when they know there is a low ceiling in their lives, and worse, when they see their children having no possibility to get out of the trap.

We live in a connected world. I have worked many years in some of the poorest countries, as an economic and social development adviser with the UN. In these fourth-world regions, people suffer from poverty, but they are not isolated or uninformed. In one way or another, they see some TV programs, they contact trained personnel in regional hospitals, they are perfectly aware of the social gap, of the possibility of having a decent school for their children, of having some basic comfort. In many cases it means having access to clean water. Poverty is presently accompanied by its consciousness.

In Guinea-Bissau in West Africa, I stopped my car to chat with a peasant going barefoot on a small dirt-road. I commented with him on the drought that had hit the region, asking how they were coping. He looked at me, at the Jeep, and asked what ‘we’ were going to do about it. For him, it was not the fatality of the climate, but the lack of support. By ‘we’ he clearly meant the system, the administration, the different organizations, knowing well where the failures begin. How does that person feel seeing his poor kids at home? The poor are not a category, they are persons, with the same intelligence and the same potential to contribute to society, and presently quite aware of the social castration they are suffering.

How does it feel to be twenty years old in Algiers and having no perspective in your life, seeing your older siblings in the same situation, surviving on some informal jobs? The humiliation I saw in Morocco, with a swarm of men trying to sell themselves as tourist guides for a few hours: I myself am not a person anymore speaking to other persons, just a money source facing desperate adults. In North-Africa 70% of the working force are in the informal sector, an elegant category to say they are just hanging-on. In the bars the TV shows them the luxurious life on the other side of the Mediterranean. We are a connected world, arrogant prosperity is seen everywhere. Connected and distant. On Wall Street, they chant ‘Greed is Good,’ with other people's money.

In Guatemala, on a mission for Unicef, I had a large meeting with community organization leaders. All of them very young. In private talks after the meeting, I commented on the lack of older leaders. I discovered the extent of murders by the militias. Honduras, El Salvador and others fare no better. The banana corporation we read about in A Hundred Years of Solitude, with the killings, was sometime called United Fruit, but presently changed to the merry name Chiquita. A clean new brand, getting rid of the dirt. Things have hardly changed, as we presently can see on the Mexican and American borders. The violence, inequality and poverty have not changed, but the understanding has. People are on the move, everywhere. We are fencing countries, building walls, putting more ships on regional seas. Does it make any sense? An immigrant smuggler commented with a French journalist: “if you invested in development here, you would not have people on your borders.” When people understand the trap, the moods and attitudes change.

This has been widely used by right-wing extremists. Henri Giroux wrote an in-depth paper on the transformations in the US. “Right-wing extremists have redefined the notion of freedom by detaching it from any sense of the common good and ethical considerations, while reducing any vestige of liberty to an individual and utterly privatized right. Mimicking neoliberal values, freedom now flees inward, reduced to almost pathological self-centeredness that is increasingly hostile to the common good, matters of mutual support, and social responsibility.” It is a vicious circle, inequality generating social polarization, frustration and violence, leading to more corporate-dominated politics and inequality. The poor voted for Trump, who feeds on hate and frustration. He drastically reduced corporate taxes, not inequality.2

This is not strictly about poverty or the lack of resources. The American bottom 50% are surely better off than so many poor in developing countries. But they feel the trap. And they feel their youngsters’ traps, as they are caught in the web of student debt which was supposed to get them free. The kids do have a diploma now, but are caught in the financial net. In the 1970’s, Vasco Cabral invited me to help build a development plan for Guinea Bissau. When I asked him what he would pay me, he said my salary would be higher than his. I understood what he meant, and accepted the $300 a month salary.

We were building a future, bringing economic and social ladders for a country freeing itself from colonialism. We had hope, and a feeling of building our future. Modest economic conditions, but not a trap. The poor around the world are not only poor, they are locked in. A sign outside a Johannesburg park in 1971 restricts its use: "This lawn is for the exclusive use of European Mothers with Babies in Arms." The black women passing by would not have been allowed on the lawn. With ‘Black Life Matters,’ are we far off?3

Some 300 million people in the world make a living with coast-fishing, using small boats and nets, feeding their populations. They anxiously watch the huge modern fishing ships, from different countries, with their kilometer-long nets, cleaning the seas, throwing the by-catch away, keeping only the higher priced species, destroying not only the small-scale fishing activities, but the protein source for so many. From the coast or from their boats, they watch how efficient and how destructive modernity can be. Overfishing is destroying life in the seas, we have international meetings and reports, but the process just goes on. Corporations are harvesting fish they did not have to breed. Grab-it-all policy. Well, we have fish-farming now, also corporate interests, but they must fish other species to feed the farms. Another environmental disaster, high profits for the few, and a huge feeling of anger and impotence on the coasts around the world.

The war in Afghanistan military costs have been estimated at $2.3 trillion dollars. This is equivalent to $315 million dollars a day, for 20 years. The result is an economic, social and political disaster, hundreds of thousands of deaths, the country in the hands of the Taliban, and hunger hitting nine million. Can we imagine what could have been done with all this money in social, cultural and economic development? For the US, is this politics or emotional catharsis, the good feeling of revenge? We cannot understand Islam fundamentalism without the century-long humiliation of so many people, all the way since the Sykes-Picot Agreement in 1916 and so many disastrous interventions in so many countries. Will the West believe the Islamic world does not study history?

Emotional harm is not healed with more violence and inequality is a sham: so many humiliated communities resort to the only common denominator they have, Islam, in this case read through revolted eyes. It is our turn to learn to read humiliations, to understand the deeper impacts of inequalities, and to build dignifying policies. We have the means and the intelligence, but we use bombs. Torture images from Abu Ghraib have been seen throughout the Arab world, everybody knows about Guantanamo. Is this making America great again?

The key issue is that technological power has radically outpaced political and social organization capacity, deepening environmental and social disaster, and generating frustration, hate and indignation that will not be quieted by so many wars, repression or border-fences. Who are the savages here?