The impact of water molecules In the previous piece, I introduced the concept of “fourth-phase” water. Fourth-phase water differs from liquid water in that its molecules are ordered. This ordered phase builds next to hydrophilic (water-loving) surfaces such as the surfaces of the proteins and nucleic acids that crowd themselves inside the cell. It follows that most, or perhaps all of cell water is the fourth-phase (also called “EZ” for “exclusion zone”) variety and not liquid water.

This assertion may seem surprising, but you can confirm it for yourself in a simple way. Just cut your arm. If biological water were a liquid, it would pour out from the cut as water pours from a breached pipe. But it does not. This feature confirms that the water inside your cells is not liquid water, but a gel-like variety with high viscosity similar to raw egg white. That is the character of fourth-phase water.

However, that assertion may be invalid. EZ water envelops every macromolecule inside the cell (figure). Those macromolecules are so tightly packed – way beyond that implied in the diagram -- that the enveloping liquid-crystalline EZ water largely fills your cells. In other words, most of your cell water is fourth-phase water. 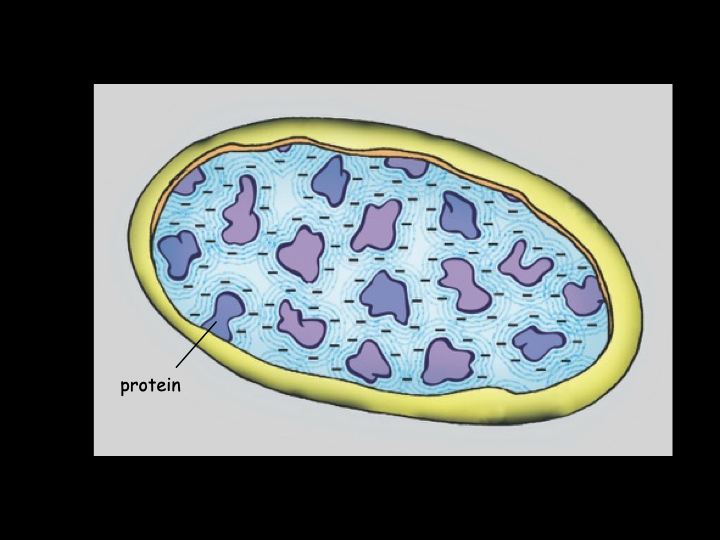 Solids pack densely inside the cell. Hence, most water is interfacial (EZ).

As elaborated in my earlier book, Cells, Gels and the Engines of Life this water (referred to earlier as “structured” water) plays a critical role in everything the cell does. Evidence shows that it is a central protagonist in the drama of cell function.

What’s new is the role of radiant energy (light). Incident radiant energy, particularly infrared, powers the buildup of EZ water, which in turn drives many of those cellular functions.

An example is the blood flowing through your capillaries. The blood emerging from your ventricles eventually encounters high resistance: many capillaries are narrower than the red blood cells that must pass through them — a kind of “plumbing” problem. To make their way through, those red cells need to bend and contort. Video images (figure) confirm that feature. In order to succeed in driving those cells through the capillaries you’d anticipate the need for lots of driving pressure; yet, the pressure drop across the capillary bed is negligibly small. 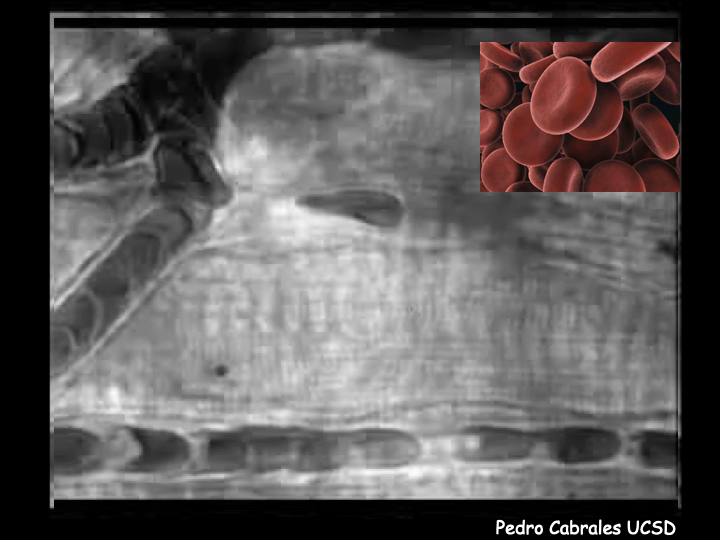 Muscle tissue. Red-blood cells (upper right), must bend in order to pass through narrow capillaries, as shown in the image.

The paradox resolves if radiant energy helps propel flow through capillaries in the same way that it propels flow through hydrophilic tubes (previous piece). We recently confirmed the validity of that tube-flow mechanism in an in vivo circulatory system. After the heartbeat had been experimentally terminated, those red cells and the suspending plasma continued to flow through the capillaries (albeit at lower rate). Hence, something beyond the heart apparently contributes to driving the blood flow.

We then tested the signature feature of the flow phenomenon: propulsion by radiant infrared energy (figure). We added infrared energy and found a reversible blood-flow increase of about 300%. Thus, radiant energy may constitute an unsuspected source of vascular drive, acting through the tubular-flow mechanism and supplementing the drive of the heart. Put another way, your circulatory system may be driven not only by the heart but also by the vessels themselves. 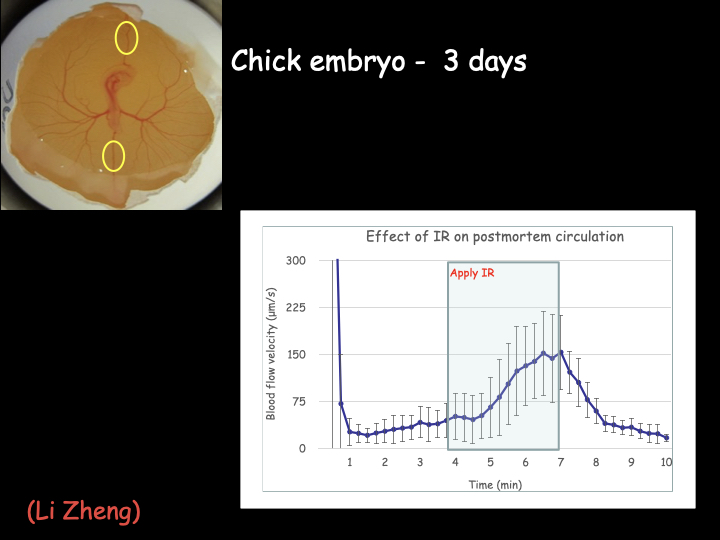 Why you feel good after a sauna now seems more understandable as well. If radiant energy drives capillary flow, and ample capillary flow is important for optimal functioning, then sitting in the sauna should inevitably constitute a feel-good experience. The infrared energy associated with heat should help drive that flow. The same if you walk out into sunlight: we presume that the feel-good experience derives purely from the psychological realm, but the evidence above implies that sunlight may build your body’s fourth phase. Fully built fourth-phase water around each protein seems necessary for optimal cellular functioning. If you haven’t enough of that water, then exposure to infrared radiant energy could build that phase and solve your problem.

It’s no surprise, then, that “Drink more water” is a common grandmotherly command during bouts of childhood illness. But there’s more. In his now-classical book, sub-titled Your Body’s Many Cries for Water: You Are Not Sick, You Are Thirsty, the Iranian physician Fereydoon Batmanghelidj confirms the wisdom of that quaint advice. The author documents years of clinical practice showing reversal of diverse pathologies simply by drinking abundant water. Hydration is critical.

Batmanghelidj’s experience meshes with evidence of healing from special waters such as those from the Ganges and Lourdes. Those waters most often come from deep underground springs or from glacial melt. Deep spring waters experience pressure from above; pressure converts liquid water into EZ water because of EZ water’s higher density. So, spring water’s healing quality may arise not only from its mineral content, but also from its relatively high EZ content. Certain spring waters have been used by natives of many countries for promoting health.

Water’s centrality for health is nothing new, but it has been progressively forgotten. With the various sciences laying emphasis molecular, atomic, and even sub-atomic approaches, we have begun losing sight of what happens when the pieces come together to form the larger entity. The whole may indeed exceed the sum of its parts. Some 99% of those parts are water molecules. To think that 99% of our molecules merely bathe the “important” molecules of life ignores centuries of evidence to the contrary. Water plays a central role in all features of life, particularly in health.

Until recently, the understanding of water’s properties has been constrained by the common misconception that water has only three phases. We now know that it has four. Taking account of this fourth phase allows many of water’s “anomalies” to vanish: those unexplainable “anomalies” turn into predictable features. Water becomes more understandable, and so do entities made largely of water, such as oceans, clouds, and human beings.

A lot more can be said about these entities, and apart from this author’s books that have been, and will soon be, published on these matters, I will describe snippets in subsequent pieces on this platform. Gerald Pollack
As a Professor of Bioengineering at the University of Washington, Pollack and colleagues have identified a previously unknown phase of water.
Author profile